Media release on taking profit out of long-term care

The COVID-19 pandemic has hit Canadian seniors in long-term care the hardest. As of today, more than 15,000 seniors living in long-term care have died from COVID-19, three-quarters of all COVID-19 deaths in Canada. Thousands of families have lost their loved ones, people who will no longer be there at family reunions, birthday parties, and for the holidays. But instead of doing something to prioritize the health and well-being of seniors in long-term care, the Liberal government and the Conservative opposition have chosen to protect shareholder profits over the well-being of family members.

Work by independent journalist Nora Loreto and others has demonstrated that seniors living in public or non- profit care have fared far better in the pandemic than those living in for-profit homes. Public records reveal that during last spring and early summer, the Trudeau government met with lobbyists from the for-profit care industry while failing to protect seniors in care. In a recent interview with the Star’s editorial board, the Leader of the Conservatives, Erin O’Toole, said that "it really didn’t matter if there was public versus private ownership" of long-term care homes.

"The Liberals and Conservatives have made it very clear during this pandemic that they are not looking out for everyday Canadians," said MP Heather McPherson (Edmonton-Strathcona). "The NDP is clear, nobody should profit off the neglect of our seniors in long-term care. At the same time our seniors were being abandoned by the for-profit companies that were supposed to be providing care; at the same time our soldiers were being asked to take over that care in Ontario and Quebec; at the same time for-profit companies like Chartwell and Extendicare were awarding shareholders with dividends; the Liberal government was holding meetings with lobbyists from these corporations — at least 24 meetings — including at least 3 times with senior staff in the Prime Minister’s office," McPherson added.

"Liberals and Conservatives are out of touch with the reality families and their loved ones have faced in for- profit long-term care during this pandemic," said NDP Leader Jagmeet Singh. "The deaths in long-term care could have been avoided if profits weren’t the main goal. When profits influence decisions, we minimize the importance of people’s dignity and well-being." 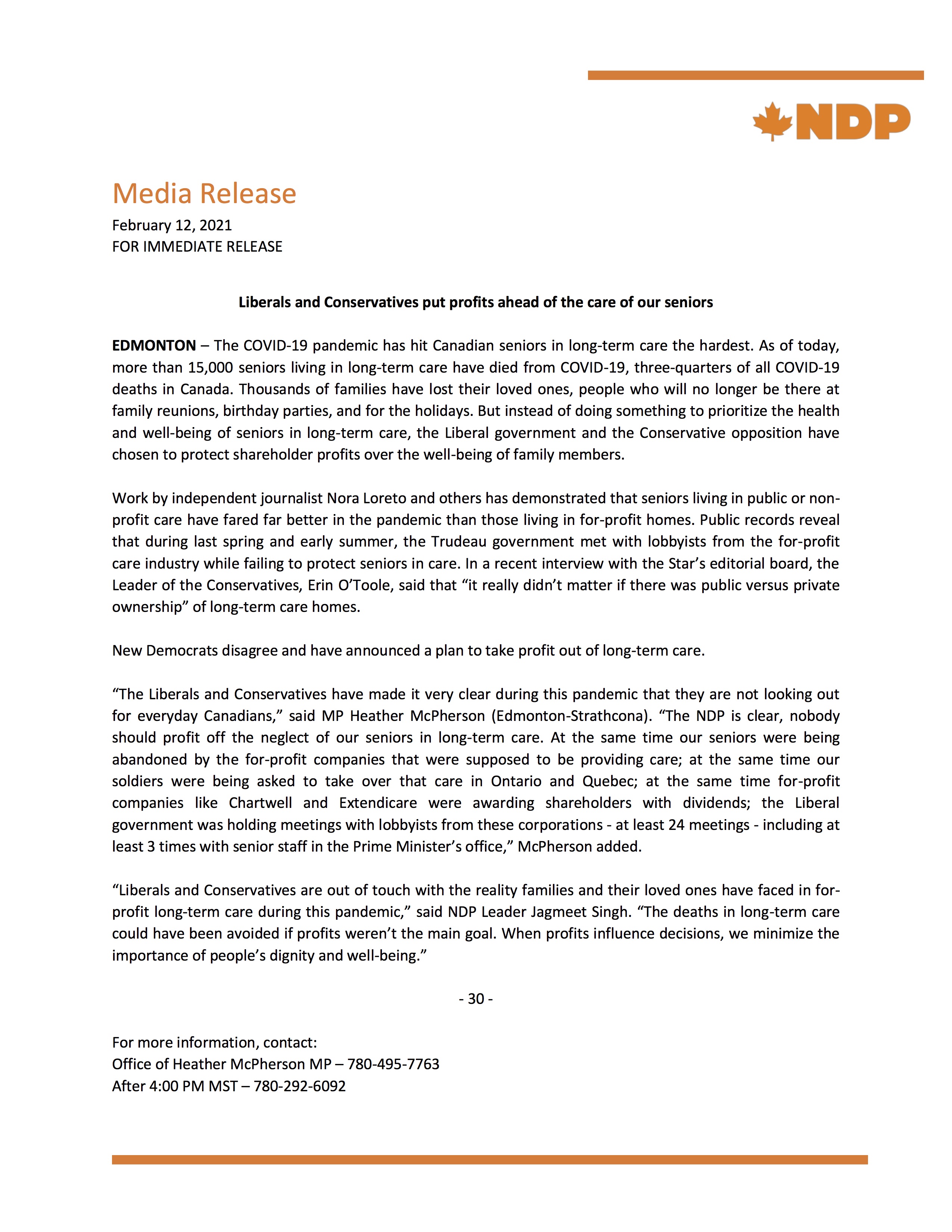