Thank you for meeting earlier this week to discuss the grave concerns so many Canadians have regarding Benga Mining Limited’s (a subsidiary of Australian Riversdale Resources) proposed Grassy Mountain Coal Project and the opening of the eastern slopes of the Rocky Mountains for coal exploration and development.

The Government of Canada must act to protect this ecologically valuable and sensitive ecosystem, the waters that issue from the area, and the species at risk that reside there from coal exploration and mining. Further, it is incumbent upon your government to ensure that all resource exploration and development proposals meet the highest standards for consultation with and involvement of Indigenous peoples in accordance with the UN Declaration of the Rights of Indigenous Peoples.

Most areas of the eastern slopes of the Alberta Rocky Mountains have been protected from open-pit coal mining since 1976 when, under Peter Lougheed’s leadership, the Alberta Government deemed the area too important, for environmental and recreational reasons, to allow mining to occur. The eastern slopes are comprised of sensitive land that cannot be restored.

Open pit coal mining creates myriad environmental problems including the leaching of selenium and other pollutants into watersheds and requires the diversion of water in an area that is already experiencing scarcity and increasingly frequent droughts due to climate change. The Grassy Mountain Coal Project threatens the water supply for much of Southern Alberta, including drinking water for Lethbridge, Fort MacLeod and surrounding communities and the irrigation water that farmers and ranchers rely upon for our agricultural system. If the Grassy Mountain Coal Project goes ahead, it will open the door to further projects in the eastern slopes which, together, threaten both the South and North Saskatchewan river basins including the Oldman, Bow, Red Deer, and North Saskatchewan Rivers. We have seen the devastating effects that selenium contamination has had on other river systems in Canada and around the world. For example, the US has raised concern over selenium from the from Teck coal mines on the Elk River. The impacts of opening the eastern slopes to coal mining will be felt far from Alberta’s borders.

The eastern slopes are home to species at risk including the Westslope Cutthroat Trout, Bull Trout, and Whitebark and Limber Pines. Despite the proposals of Benga Mining Ltd., independent scientists have concluded that there are no technologies that can prevent the negative impacts of open pit coal mining on these species. In addition to their loss, Canadians stand to lose the very thing that makes the eastern slopes so special – the natural beauty of the area that draws anglers, hikers, wilderness enthusiasts, and tourists from across the country and the world.

Albertans do not support opening the eastern slopes for coal exploration and development. As they become more informed about the proposed mines, their opposition is growing by the day. More than Over 100,000 Albertans have signed petitions to stop open-pit mining in the Rockies. Roughly 4,000 Albertans wrote to the Joint Review Panel pleading with the federal government to stop the project. Within weeks, as Albertans have come to learn about the Grassy Mountain mine project, a grassroots group opposing this project has swelled to more than 9,000 members. These Albertans come from all sectors, all regions, and political affiliations.

Almost all the economic benefits associated with this development will go to foreign owners and all the economic risks will be assumed by Canadians. As you well know, Canadians are already facing extraordinary cleanup costs associated with abandoned oil and gas wells. Coal mining on the eastern slopes promises a second costly environmental reclamation liability. Combined with the costs that will be borne by downstream communities, agricultural producers, and tourism operators, the minor economic benefit accrued through the few jobs supported and miniscule royalties created cannot compare.

The Lougheed government spent six years in community consultations leading up to the coal policy that banned development in the eastern slopes in 1976. In contrast, Albertans and the Indigenous people living in Alberta were not consulted when the Kenney government reversed this ban in May of 2020. In fact, according to media reports, the Kenney government consulted with only one group prior to the decision – the Coal Association of Canada. Currently, three First Nations (the Bearspaw, Ermineskin, and Whitefish) are challenging the Alberta government’s recission of the Coal Policy without consultation. The Government of Canada has both a responsibility to ensure that all Canadians impacted by open pit coal mining in the Rocky Mountains are considered and an obligation to consult with First Nations on a nation to nation basis.

On behalf of our constituents and the millions of Canadians across the country who are looking to your government for environmental leadership, we urge you to reject the Grassy Mountain Coal Project and all subsequent open pit coal mining project proposals on the eastern slopes of the Rocky Mountains. 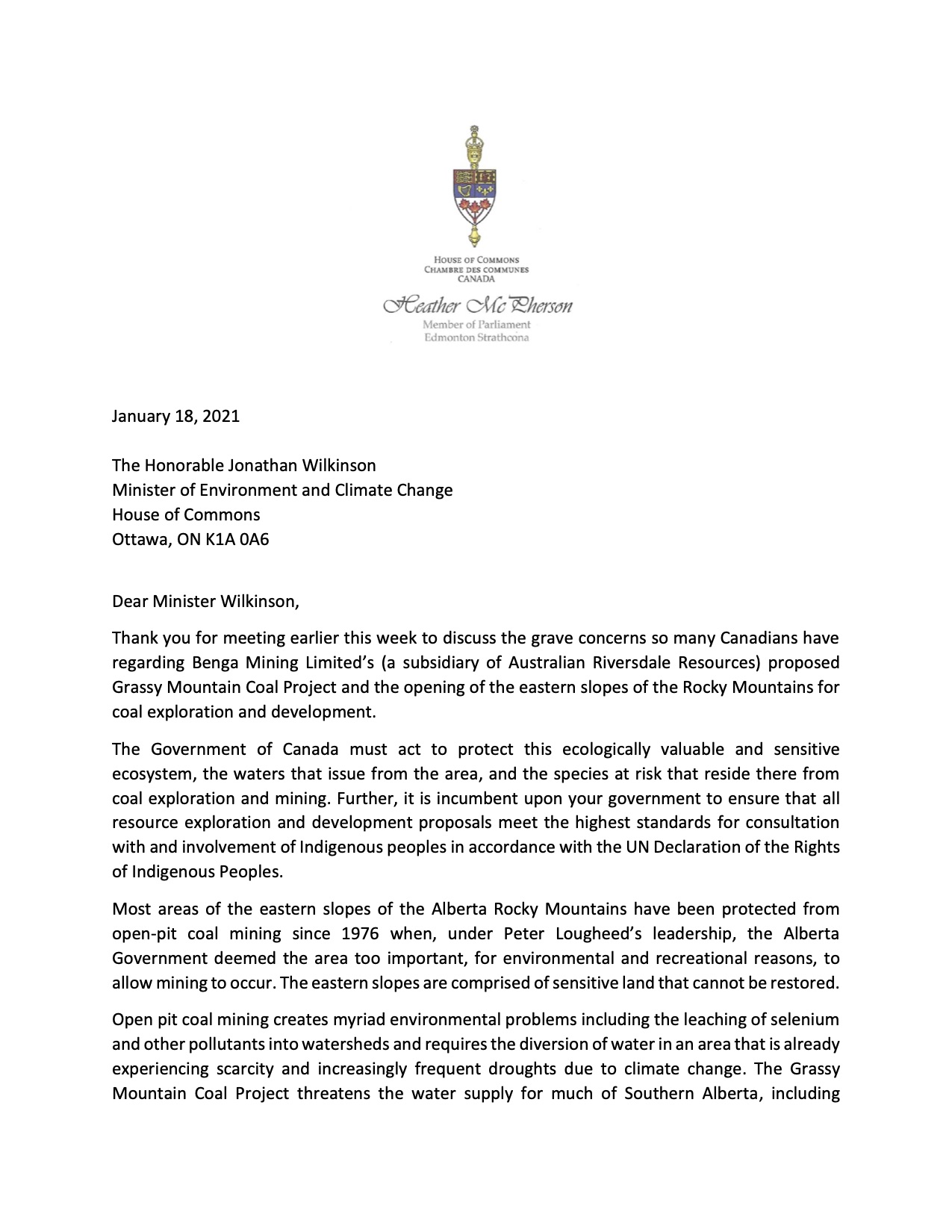 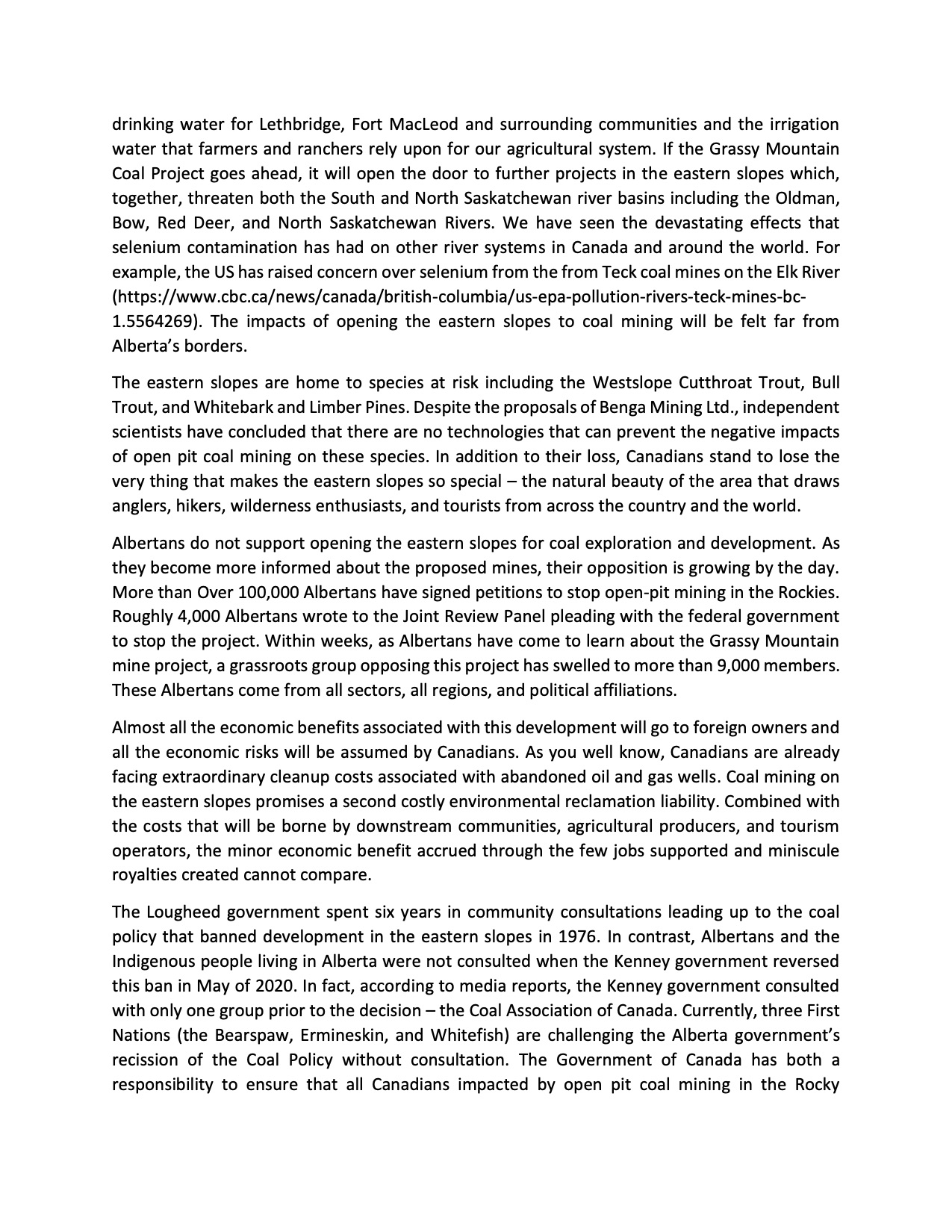 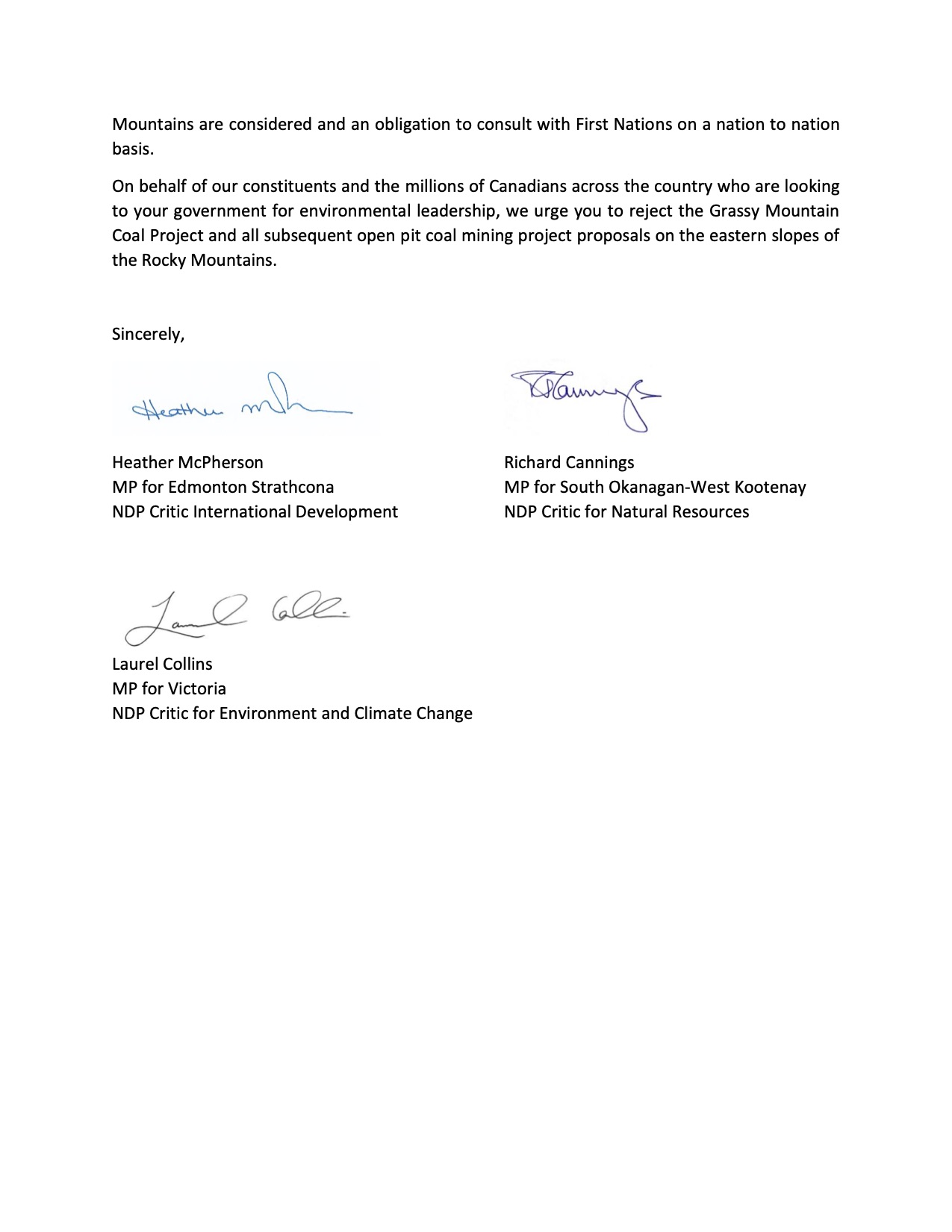