We write to bring your attention to the latest development in the Hong Kong Special Administrative Region (HKSAR) and refer you to the Statement of the Hong Kong Bar Association of April 20, 2020, which you will find attached.

In preparation for the handover of the then British colony of Hong Kong to the People's Republic of China, the late Chinese leader Deng Xiaoping instituted the “one country, two systems” constitutional principle for the governance of Hong Kong. Under the principle of “one country, two systems,” the residents of Hong Kong were promised safeguards of their fundamental rights and freedoms, as well as the independence of the executive, legislative, and judicial systems of their government. These safeguards were put in place to build a foundation for political stability after the handover, and to build confidence and trust between the residents of Hong Kong, the international community, and the People’s Republic of China. The “one country, two systems” principle is a promise from China to the world that Hong Kong will be able to retain its prosperity and stability.

The principle of “one country, two systems” is consistent with the Sino–British Joint Declaration, an international treaty signed in 1984 between the People's Republic of China and the United Kingdom of Great Britain and Northern Ireland. The Joint Declaration stipulates the sovereign and administrative arrangement of the then British Hong Kong after 1 July 1997.

The Basic Law for the Hong Kong Special Administrative Region, which serves as the de facto constitution of Hong Kong, came into force on 1 July 1991 and is authorized by Article 31 of the Constitution of China. It embodies these promised safeguards into law.

The Basic Law also provides that Hong Kong shall enjoy executive, legislative and judicial powers, including
the power of final adjudication (Article 2), whilst the Central People’s Government (CPG) shall be responsible for the foreign affairs and defence related to the HKSAR (Article 13 and 14). With respect to HKSAR’s internal affairs, Article 22(1) provides: “No department of the Central People’s Government and no province, autonomous region, or municipality directly under the Central Government may interfere in the affairs which the Hong Kong Special Administrative Region administers on its own in accordance with this Law.”

As noted by the Hong Kong Bar Association, Article 22 prohibits interference in the internal affairs of the HKSAR by any part of the CPG, which is itself bound by the provisions of the Basic Law, being a national law of the PRC, including Article 22(1).

As such, it is alarming to see the recent public comments made by the Hong Kong and Macau Affairs Office (HKMAO) and the Liaison Office of the CPG in the HKSAR (LOCPG), with respect to a recent Court of Appeal judgment on the Emergency Regulations Ordinance and affairs in Legislative Council. In their comment, the LOCPG said that the office and the HKMAO are not “department[s] of Central People’s Government” within the meaning of Article 22(1). It went on to say that they were bodies authorized by the CPG to handle HKSAR’s affairs and had the right to exercise supervision and express serious views on affairs regarding HKSAR and the Mainland.

Since the LOCPG is an organ of the People’s Republic of China in the HKSAR, it is therefore under the jurisdiction of the State Council of the People’s Republic of China. The comments made by LOCPG are contrary to Article 22 and put the “one country two systems” and HKSAR’s high autonomy in jeopardy. It most certainly, as noted by the Hong Kong Bar Association, serves to undermine confidence in the Chinese and HKSAR Government’s commitment to the principle and practice of “one country, two systems” as enshrined in the Basic Law.

In the recent G7 summit, the G7 group issued a statement to “reaffirm the existence and importance of the Sino-British Joint Declaration of 1984 on Hong Kong”. The statement makes clear that China’s treatment of Hong Kong is important to its standing in the international community and it is expected to meet its obligations. As there are a large number of Canadians residing in Hong Kong, the well-being of the HKSAR is important to Canada and we have an extra obligation and responsibility for their well-being and that of the HKSAR.

We urge Canada to convey our concern on this matter to the People’s Republic of China, as well as to communicate with our allies to find ways to ensure the integrity of the implementation of the Sino-British Joint Declaration is maintained. 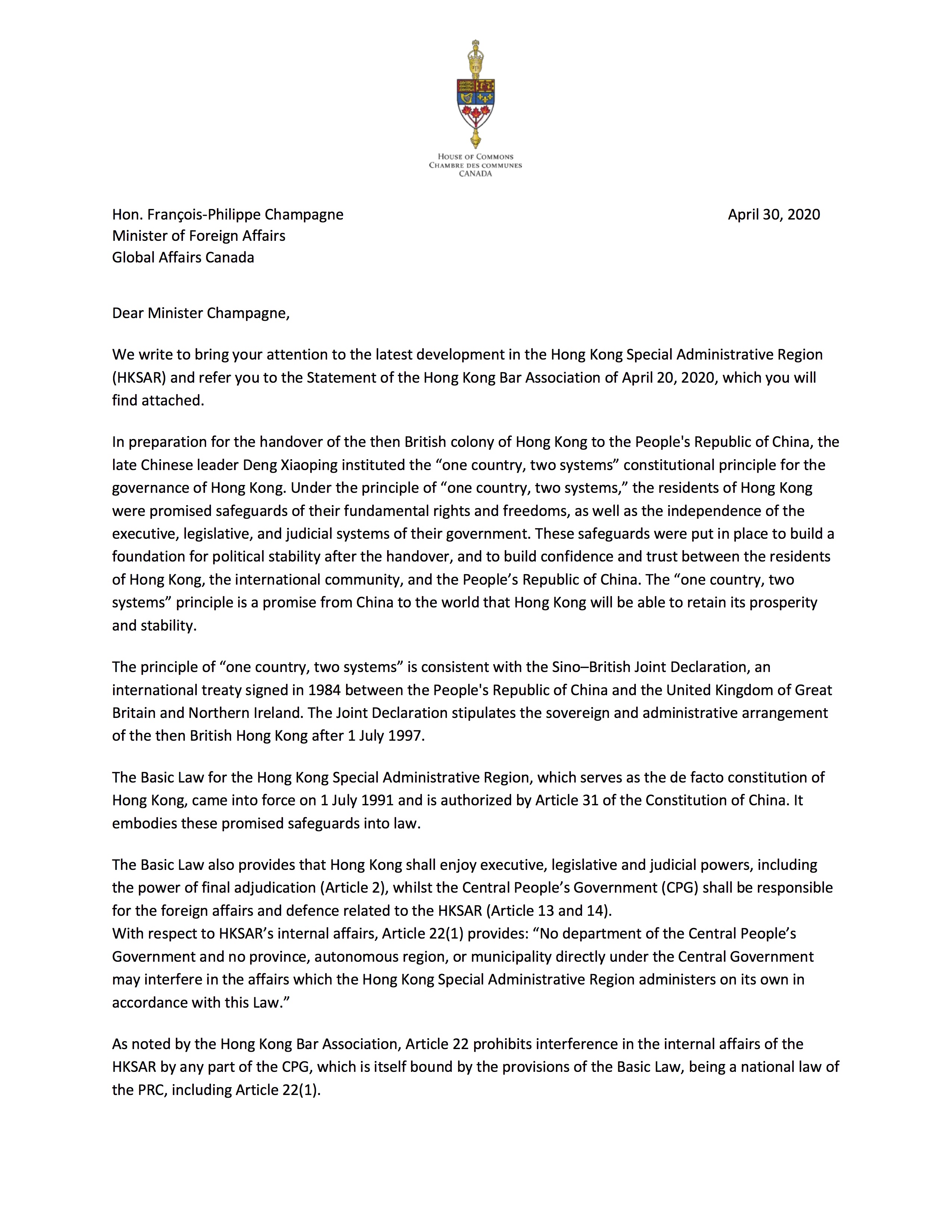 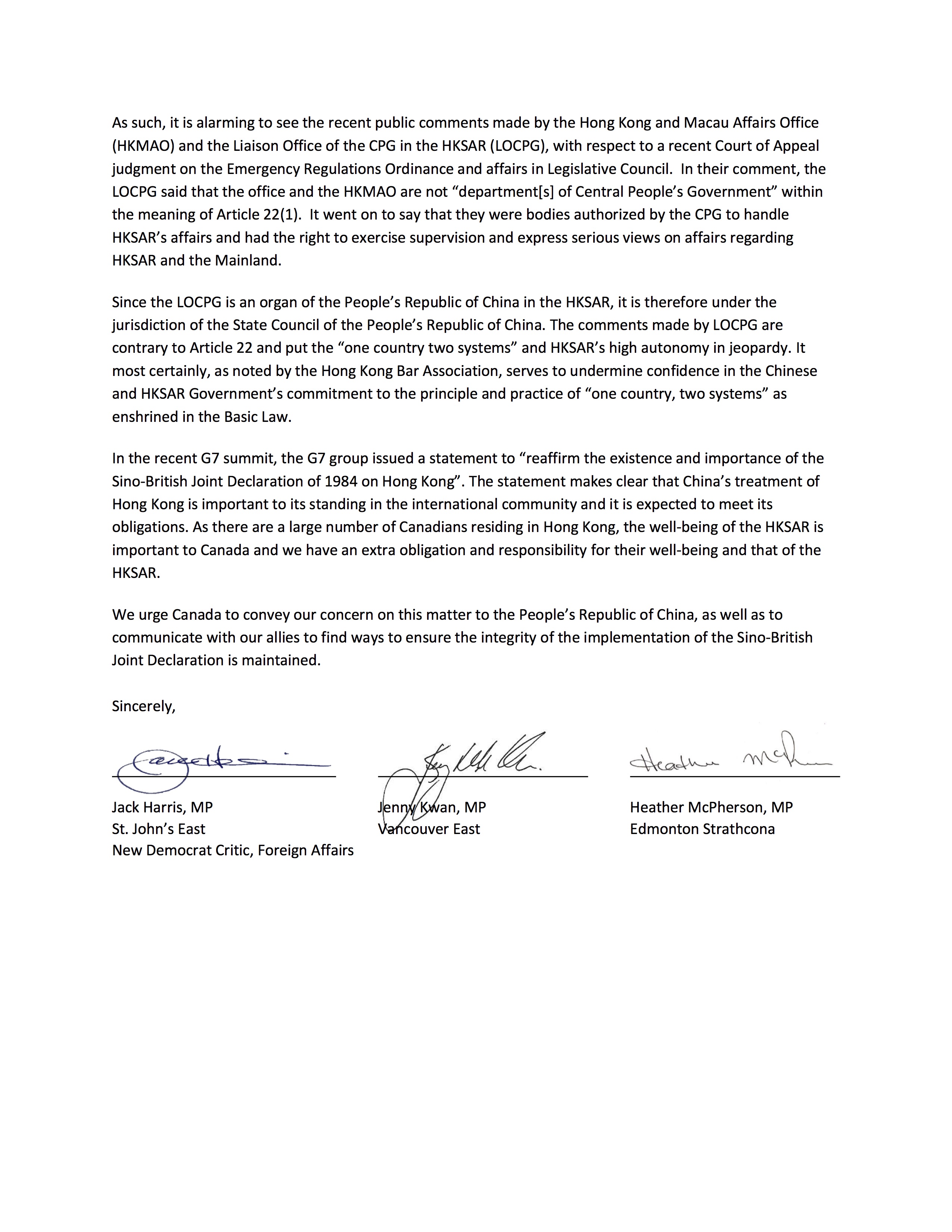